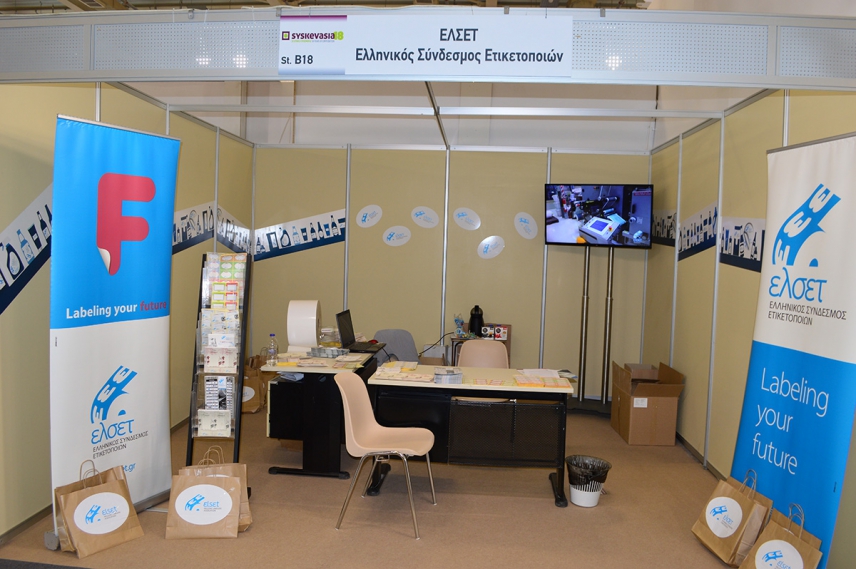 Following its rising, “SYSKEVASIA” presented impressive results for 2018 too.

In the same time, the 10th “Plastica” took place, with the same success.

The two exhibitions took place between 12th and 15th October.

Just like last year’s “SYSKEVASIA”, ELSET this year also was present with its own kiosk –a kind offer from the organizers.

Almost 300 participants visited our kiosk and they got informed by the stuff we disposed. Inside our informative bag, we disposed the informative leaflet for ELSET, indicative labels for some products and some labels with slogans against child bullying. Also, there were advertising leaflets of the companies who are members of ELSET.

The majority of the visitors, just like 2016, were people who think of starting up some small production units, basically of agricultural and livestock products.

As always, a lot of events took place in the same time with the exhibition and they managed to gain a great part of the visitors’ interest. The conference under the name “Quo vadis packaging”, organized by the Panhellenic Union of Graphic Arts Graduates, ELSET Association of Greek Screen Printers (SEME) and the Association of Industries of Material & Packaging Production (SYPIVIS) was one of them. The issues of this conference were the followings:

-Label: the past, the present and the future.

ELSET thesis was developed by its president, Mr. Avgerinos Chatzichrysos. Here are some points from his speech:

Referring to the past, he explained that labels are connected to Greece’s national product. According to historical testimonies, the best cotton of Thessalia went to Marseille, where most modern (for this era) devices were making threads for cotton fabrics. Workers stuck on the wood package where cotton was put a material, where someone wrote on manuscript “Use to Marseille”. This inscription was only for cotton, so there was not any other information. The porters, who didn’t speak any English, thought that the phrase on the material was “Ouze to Marseille” and that the word “ouze” means “the best”. In the porters’ argot, there were a custom of using only the first word of the phrases written on the packages. So, they were searching for the “ouze” packages, in order to put them on the ships which boat to Marseille.

In the greek city Tyrnavos, where the famous greek drink tsipouro is produced for many centuries, Someone who wanted to win the favor of the Ottoman commander of the region, decided to add anise and spices on tsipouro, in order to enrich its taste. When the Ottoman commander drunk it, he was excited from its taste and yelled the word “Ouze”, which he also, just like the porters thought that it means “the best”. As the years were passing by, this new drink adopted a more greek oriented name and became the trademark greek drink ouzo.

For the present, he noted the necessity of the labels for the products and he asked the audience to think how the products handling would be possible, without the “identity” that labels give to the products.

The biggest part of his speech about the future was dedicated to “Labelicious” event, which is organized by FINAT (the international Labelers Association) for its 60th birthday. As ELSET president explained, young people are requested to unfold their talent on labeling, in order to find out a new generation which will make the label industry’s future even brighter.

With the occasion of its 30th birthday, “SYSKEVASIA” awarded he companies which participate constantly in every year’s event, from 1988 until this year. They also awarded collaborators who support it. So, ELSET was awarded for its “long-term support towards the exhibition”.

The award was received by the cashier of the Administrative Council, Mr. Aggelos Mpalamatsias, who thanked the organizers and wished them to meet each other again in the 60th birthday of “SYSKEVASIA”.

View the embedded image gallery online at:
https://www.elset.gr/en/news/participation-of-elset-at-syskevasia-2018#sigProIdafad95ffd9
back to top

Subscribe to stay up to date with the latest developments